The new Northwest Metro project has the potential to transform a low density, car-dependent region of Sydney with the introduction of eight metro stations supporting a series of town centres that will be developed over time to realise the benefits of mass rapid transit. Tallawong will form the last stop on the new metro linking the northwest region of Sydney to the existing rail network. The existing character of the site is the most rural of the proposed town centres with a mix of woodlands, small scale agriculture and low density suburban housing. The proposed Tallawong Road Station Precinct South development has been designed to create an active and walkable neighbourhood with the metro station at its core. 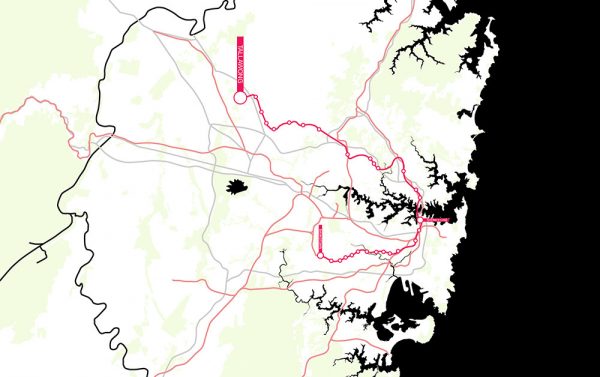 URBAN STRUCTURE
The proposed street pattern is rationalised and extended through the development to create a clear and legible urban grid. A network of pedestrian and cycleways is then introduced to complement and extend this urban grid with a series of through-site links dividing the developable areas into smaller blocks to create a permeable and pedestrian friendly urban environment. The proposed pedestrian and cycle network will provide direct links between the residential areas, the town centre, the metro, neighbouring suburbs such as The Ponds and the adjoining Seconds Ponds Creek riparian corridor.

OPEN SPACE NETWORK
A series of open spaces including a public park, plazas, landscaped zones, and communal open spaces are distributed throughout the site to create a connected open space network that will provide amenity to residents, visitors and employees. These spaces differ in scale and character and support a wide variety of uses for both residents and visitors to the town centre and are designed to compliment the existing open spaces in surrounding areas. The proposed open space network is integrated with and connected to the wider green infrastructure of the district including the adjacent riparian corridor, a series of playing fields to the south and the Rouse Hill regional Park to the north. DENSITY AND DIVERSITY
Higher density housing is accommodated in buildings ranging from 2 storeys to 8 storeys to provide a variety of urban scales within the development. Taller buildings have been strategically located to alleviate overshadowing to public spaces and to concentrate density with the amenity provided by the proposed landscaped areas and the views towards the Second Ponds Creek Riparian Corridor. Within this built form, a range of housing types are proposed including maisonettes, low scale terraces, and a range of apartment types to accommodate and foster a diverse community. Building forms are designed to optimise access to daylight, natural ventilation, privacy and appropriate building separation.

AN ACTIVE TOWN CENTRE
Mixed Use facilities such as retail, childcare, a work hub and community spaces are proposed for the ground and first floor areas adjoining the metro station and the public park to activate the town centre. SCOPE OF SERVICES
Bennett and Trimble have been engaged by Landcom, the state government agency and master developer for the site, to develop a concept plan for the developable government lands adjacent to the proposed metro station that will demonstrate best practice urban design and act as an exemplar for development. Our engagement included the following: